Here on the West Coast we had a cool start this morning,  the hummingbirds were busy looking for nectar but the silly birds kept going to the one feeder where the sugar solution had frozen. I had put out a new smaller feeder with fresh solution but they kept going back to the frozen one ….silly birds, so I brought the frozen one inside for a while to thaw out and it gave them a chance to find the good stuff!

We have all kinds of woodpeckers here in our garden, Downy, Hairy, Pileated and the Northern Flicker. I had never seen the first two types but now that we put out Bark Butter….they come everyday and eat it as quickly as I can get it out there. It is a spreadable suet that can go into a small log feeder.  One and half inch wide cavities have been drilled into a small branch or log, pack these holes with the spreadable suet and hang somewhere away from squirrels. ( That is quite a challenge around here.) My log has a small eye screw on the top to make hanging it a bit easier. All the small birds love it too  including chickadees, nuthatches and bush tits.  Even juncos fly up to it although I have to say they look a bit precarious, they are usually ground feeders and don’t quite know where to land on the log and madly flap their wings, most figure it out and eat quickly.

My apologies for the rather poor quality of the above picture but I was inside looking out but I hope you can see the log feeder hanging below the squirrel proof suet feeder. There is a tail prop feeder close up with some bark butter spread on this side and a hopper (House) feeder in the background. The woodpecker photos came from the Cornell Lab of Ornithology. The Pileated on the left and the Downy on the right.

Now onto other things…the knitted mitts. I am not sure if I will make this into a pattern to sell, as much as I would like to, I don’t know how too ! so I have a little learning to do first. Here are some of the proto types.

The yarn in the top pair is Patons 100% wool with added felted cuffs and the pair below are made from handspun silk and wool. ( not mine,  but a lovely lady called Lyn who lives locally.)

Lastly I would like to show you some more of my eco dyeing projects. Some went well others not so good but all have been  great fun….now I have to decide what to do with them. I think I will definitely hand stitch over some of them. The one with the pink lines in it was a mistake I tied the bundle with bright pink yarn never thinking the dye would come out I thought it was acrylic ! oops…oh well maybe it will be better with added embellishments. As you can see one of them is very yellow, I used saffron which a friend had given to me….but I was rather heavy handed with it … a little goes a long way !

I love how the creative process gets the mind working and ideas keep popping up, some of which actually turn out to be useful!

I have a new knitting project on the go which I am very excited about. This is my own design and I have been playing around with it for a while. It all started because a friends Mum asked if I could make her a pair of speciality gloves. She needed to have warmth as well as dexterity. I must admit I thought it would be very simple to do! just adapt a glove pattern and we are good to go….well that is mostly true, but I needed to factor in specfic measurements. Well I have made a few proto types and I think we are on our way to designing something worthwhile, more on this soon.

Now for something quite different, here in South Western B.C  we have a hummingbird that stays all winter. That just amazes me, we have had surprisingly cold weather lately and this little bird will start nesting in February…brrr. The hummingbird is the Anna’s and here is some information about them from the Cornell Lab of Ornithology:

Anna’s Hummingbirds are among the most common hummingbirds along the Pacific Coast, yet they’re anything but common in appearance. With their iridescent emerald feathers and sparkling rose-pink throats, they are more like flying jewelry than birds. Though no larger than a ping-pong ball and no heavier than a nickel, Anna’s Hummingbirds make a strong impression. In their thrilling courtship displays, males climb up to 130 feet into the air and then swoop to the ground with a curious burst of noise that they produce through their tail feathers.

This is the male Anna’s, isn’t he just spectacular! The female Anna’s  has a stout body with short, straight black bill
central iridescent pink throat patch  Some females show several scattered pink feathers on face.  White above and behind eye.

We have a hummingbird feeder ( seen in the above pic,  Anna’s female is on it !) in our garden and have such pleasure from seeing two of these wonderful birds daily. They are quite fiesty and do not allow each other to drink at the same time. By the way the sugar water solution for these birds is one cup of boiling water and 1/4 cup of plain white table sugar. Mix up and allow to cool before placing in your feeder. DO NOT ADD FOOD COLOURING to this….it is not good for them. Also do not change the ratio because you think they may need more sugar, it can be hard on their kidneys and could kill them. The sugar solution should be changed regularly I clean my feeder out once a week in the cool weather and twice a week in the summer. We have the Rufous hummingbird here in the summer more about them later.

A New Year A New Start 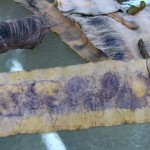 Here we are a new year and a new start. It feels good to begin something different, my plan for the foreseeable future is to work on small scale portable projects, the main reason behind this is of course that I have a lot less time to dedicate to my passion. With working part time it is amazing how little time I end up with to create….with hearth and home and everything else, no complaints just observations!

I have been busy making  eco prints, when the weather has allowed. I do this outside because I do not as yet have a pressure cooker to do the “cooking” part of eco bundling. I have quite a few lovely pieces of fabric with various designs of  leaves and flowers from our garden, some I love and others not so much. My plan is to take small pieces of eco printed fabrics  and start working embroidery stitches, use other bits and pieces to embellish with and see where the path leads me!

I hope you are feeling creative as well and I wish you joy and passion with your endeavours.

Using natural elements from my home and garden I started to experiement with Eco printing. I gathered leaves of varying sorts from the garden, previously solar dyed fabrics and a new item, an all cotton shirt. I have been reading India Flint’s book Eco Colour which is where this idea has come from. First of all I needed to lay out the leaves on the fabrics and then roll them up around a stick and tie up well with string. Then I soaked my fabrics in a mixture of St John’s Wort dye with a litte beet juice added, boiled them for approximately 10 minutes, it may have been longer but not much. My fire was very hot and the liquid almost boiled dry. Then I left said items for almost two weeks at which point I took them out of the liquid and set them to dry outside. Another two or three weeks has passed and I opened them up today. These are the results.

Posted in Make It Yourself, recycled clothing

Trying my luck to-day with a little solar dyeing. Easy peasey! just put your choosen flowers, leaves or other into a glass jar fill with (rain water if you have it) tap water. Place your piece of fabric inside with the flowers and water screw on the lid and leave in the sun for at least a month….let the magic begin.

Although I do not really have much to say to-day, I wanted to show you some wonderful pictures from a recent trip to the Sunshine Coast here in B.C only a short ferry ride away. The weather was perfect, the company grand and I spent a lovely day in Gibsons B.C on my birthday puttering around funky little shops and admiring the boats in the harbour. The sky was blue and life was good!

A big thank you to all those who sent birthday wishes, I really loved them 🙂 Last but not least I wanted to share with you two presents that I received and have amalgamated. The lovely green teapot was a great thrift shop find by my dear friend Sue, she knows how much I love this colour, and the flowers came from my boss at work…don’t they look great together ?

I hope you are having a lovely summer whatever the weather and keep on being creative! Yes I am knitting when time allows…only it is a surprise so I cannot share it just yet.

A Journal of Observations

From the perspective of a frustrated creative.

An international collective of felt and fiber artists

A Journal of Observations

From the perspective of a frustrated creative.

An international collective of felt and fiber artists